It's more than a month since my last post - the longest gap in posting since I began my blog more than six years ago. For some of that time I didn't have access to the internet, and so I had some excuse for not writing. And then, after such a gap, I began to question the need to maintain the blog. But I've been travelling, and regardless of whether others read the blog, I know how much I've valued past records of my travels - and my responses to my travels - that the blog records. So here I am again, belatedly, trying to capture some of the experiences of the last few weeks.

I've decided to try for a post a day over the next week or so. I've abandoned any attempt to write thematically or to be particularly reflective. Such organisation would inevitably delay writing even more. So, however randomly, these are some thoughts on my travels. I'll begin at the beginning, Copenhagen, and try for five things about Copenhagen.

1 Copenhagen is a very livable city. I like it for the reasons I also like Amsterdam. Though it has a population of almost two million, it seems smaller. The centre of the city is flat and so is ideal for walking or cycling, and it has efficient, easily negotiable, public transport to reach more distant suburbs. Copenhagen also has a livable scale, with few buildings more than six storeys high, and lots of pedestrian plazas and spaces for lingering and observing the world. 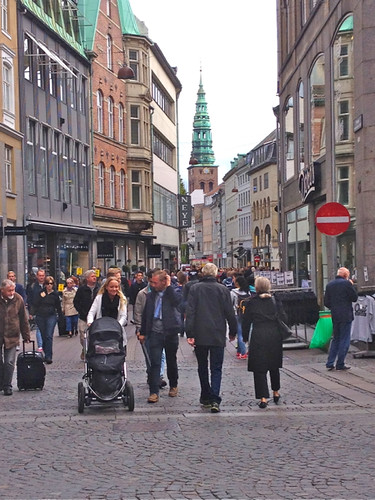 As with other old cities, some of the more intimate loveliness of the city is revealed in the courtyards tucked away behind the grand facades that line the street: 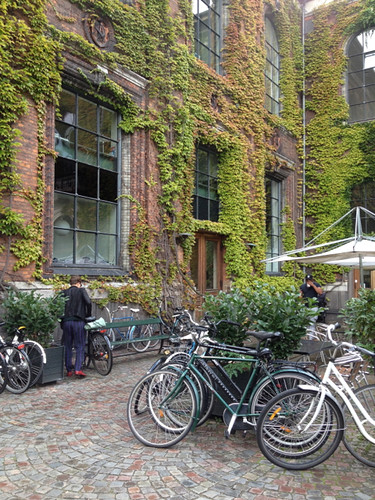 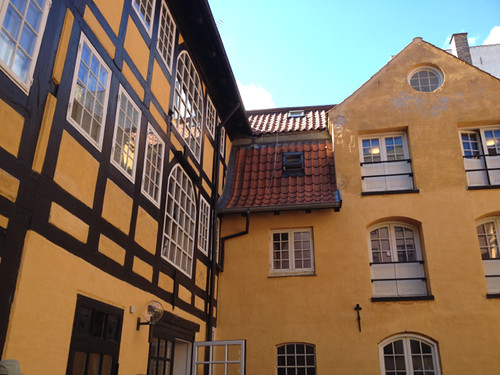 2 Copenhagen values its history, but somehow wears it lightly. Grand monuments are scattered through the city, which has grown around them in such a way that they're integrated within daily life. King Christian IV, whose reign over Denmark and Norway began in the late sixteenth century and lasted till the mid seventeenth century, was responsible for several grand constructions, including the Rundetarn, an observatory you happen upon in one of the main shopping streets of Copenhagen, 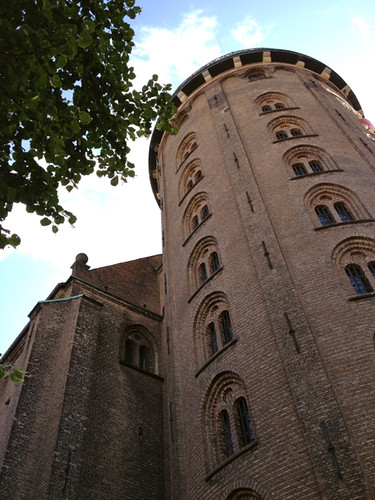 and the Rosenborg Castle, whose surrounding gardens are now a place for public enjoyment: 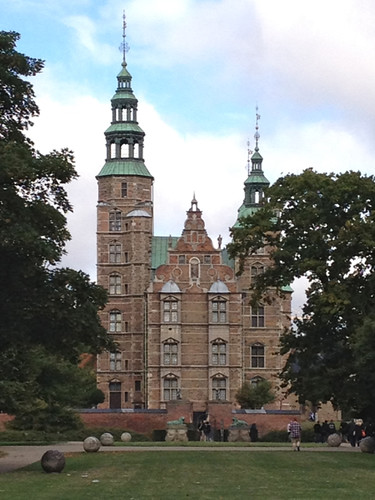 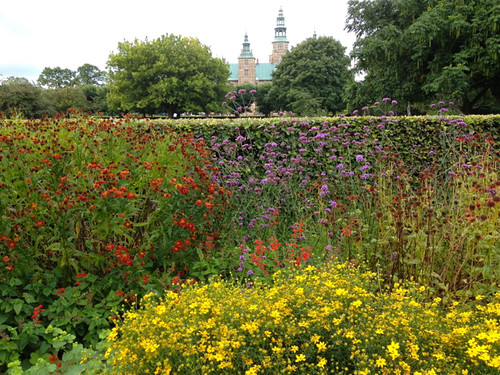 Then there's the Amalienborg Palace, a complex of four beautiful classicist buildings from the 1700s that surround a hexagonal central space that's open to pedestrians and cyclists, but also occasional cars that meander bemusedly through the unmarked cobbled area: 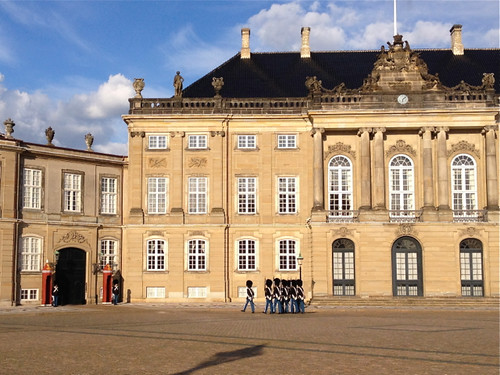 The palace was originally the winter palace for the royal family and still serves as such for the reigning monarch, Margrethe II. But it's also the home of Crown Prince Frederick and 'our Mary' and their children. Their front door literally opens into the public space and locals tell of seeing Mary escorting the children to school and the family cycling in the city.

3 Denmark's sea-going history is reflected in the geography and architecture of Copenhagen. Denmark's Viking history from about 800 to 1000AD is acknowledged in popular history and culture, and its sovereignty over Greenland and the Faroe Islands are modern remnants of its marine adventures. There are expansive old canals that reach into the city and surround grand buildings 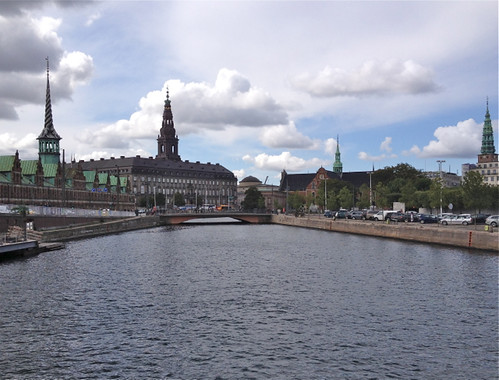 and the Harbour is being rejuvenated with walkways along the docks, restaurants, theatres, and gardens on the western side: 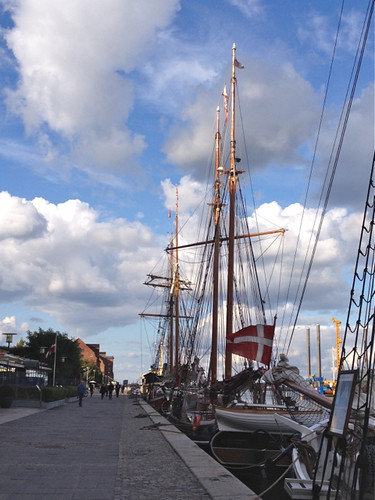 and the elegant Henning Larsen designed Opera House on the east: 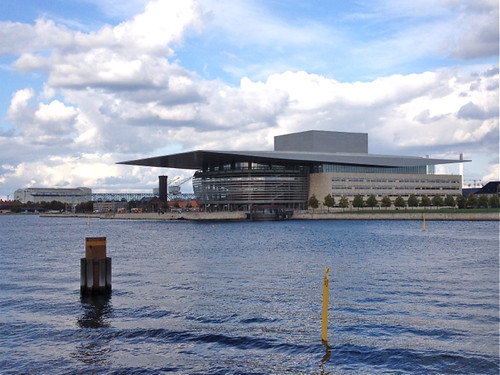 4 Copenhagen has some great museums. There's a limit to what I can see and remember from my jet-lagged state, but I loved the rather chaotic collection of the Design Museum where I was lucky enough to catch a special exhibition of Hans Wegner's iconic mid twentieth century furniture, including many of his oh-so-beautiful chairs: 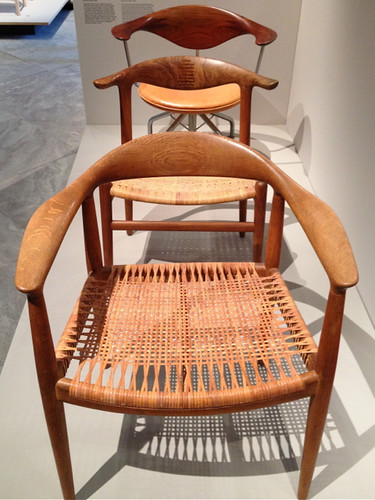 I made a special effort to visit the Louisiana Museum of Modern Art which is located about 35km north of Copenhagen on the shores of the Oresund Sound. It's one of those museums whose wonder is the combination of a beautiful setting with a building that's absolutely suited to its site and purpose. The country house that was the original museum has expanded over time with additions that integrate the gardens and external sculptures with the expansive view of the sea and the exhibitions. 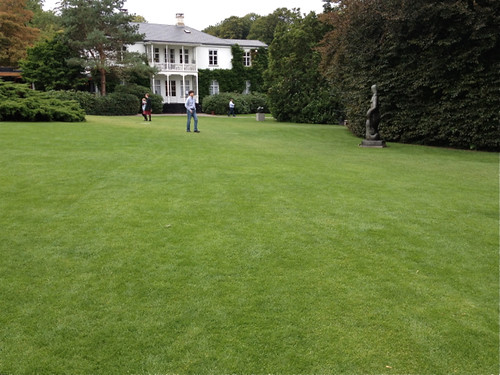 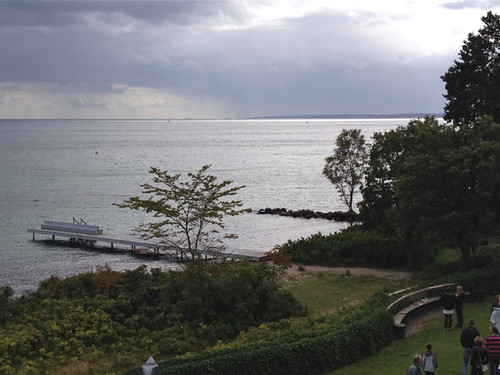 Then there's the National Gallery of Denmark which has many wonderful artworks, but which I particularly wanted to visit because of its works by Danish artist Vilhelm Hammershoj, who painted at the turn of the nineteenth and twentieth centuries. 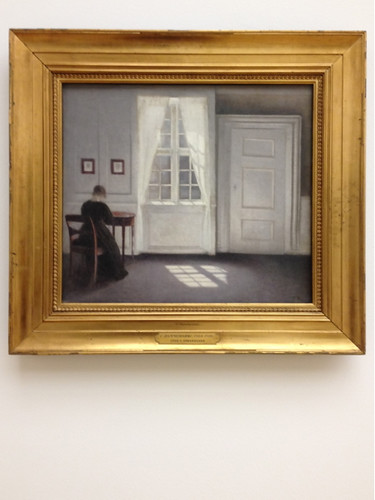 There's a whole room of these luminous paintings, sometime inhabited by quiet figures, but often simply the play of light in deserted domestic interiors. I love these paintings.

5 Copenhagen is a knitter's delight. I visited two yarn stores, both of which could supply any discerning knitter for years of knitting. I braved the metro to go to Sanne Bjerregaard's store, Rasmilla's Strik & Design. I'd been aware of Rasmilla patterns, and have even knitted one of her children's designs, Fiona's Top, and admire her style. The store was no disappointment. It was charming - stuffed with artfully arranged yarn, sample knitted garments and blankets, books and all kinds of knitting accessories. There was even chandelier! 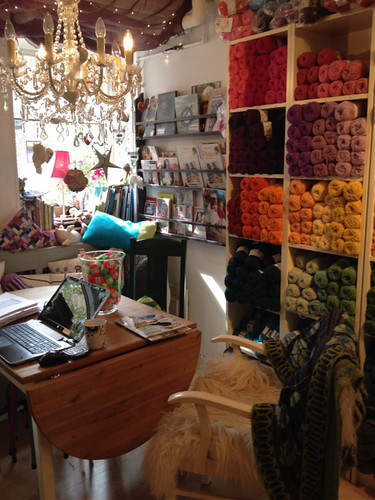 Rasmilla's was my introduction to what was to become the recurring theme of my yarn shop visits - 'sticky' yarns. This is yarn from Hjelholt's Uldspinderi in wonderful muted colours: 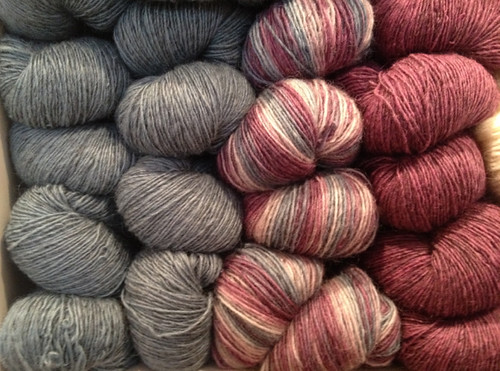 I also visited Sommerflugen in the centre of Copenhagen's shopping area. This store has an unbelievable stock of both local and imported yarns, and supplies embroiderers and tapestry workers as well as knitters. I visited this store with other knitters from my cruise group. We were like a swarm of grasshoppers making our way through the store (though I was super restrained). We were very fortunate that designer Bente Geil had organised a trunk show of garments she'd designed and knitted from her own range of yarn - Geilsk, and that she was there to discuss designing and knitting. 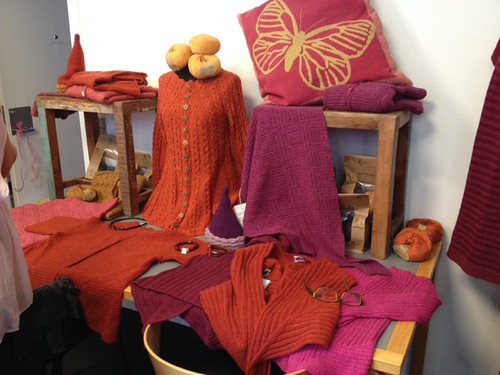 Bente most generously gave each member of the group two 50g skeins of her Geilsk Tynd uld (ironically, wool from New Zealand, though processed to Danish yarn preferences) and I bought a third skein to have enough yarn for a shawl from coordinating colours. 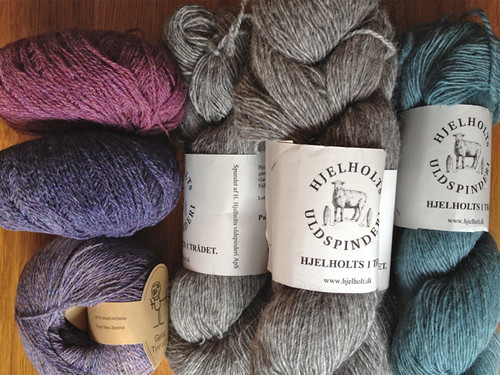