Very occasionally, you love absolutely everything about a knitting project. I was besotted while I was knitting this scarf - or shawl - and I now wear it everywhere. I don't want to be separated from it. It's one of those knitting projects that gives great results from a relatively simple and easily memorised pattern. The lace edging makes everybody think it's much more challenging to knit than it really is. 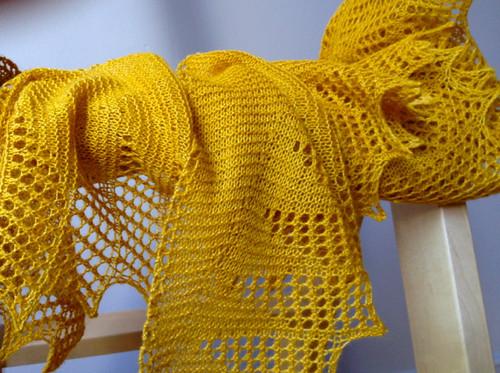 It's another of Kate Davies' designs, a Hap for Harriet, and I've knitted it in Cascade Yarns' laceweight silk/wool blend that's rather oddly called Forest Hills. Because it's knitted from a single 100gram skein of laceweight yarn it's wonderfully light and soft and ideal for mild Sydney winters. Along the way I've had to develop a theory that yellow is the new neutral so that I can wear the scarf with just about anything. Of course, when most of your clothes are grey or black this theory can hold up rather well. 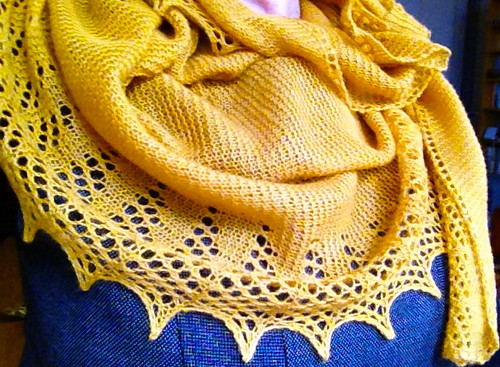 I've enjoyed making this scarf so much that I'm tempted to cast on for another, even though I have no need whatsoever for yet another scarf. Still, that's never stopped me in the past.

I've had a small hiccup with yet another of Kate Davies' wonderful patterns - a hat she's named Fugue. The yarn for this was acquired from the ever-enabling MissFee a couple of (several?) years ago. I finally decided to knit this up as part of my goal of becoming more proficient at colourwork. 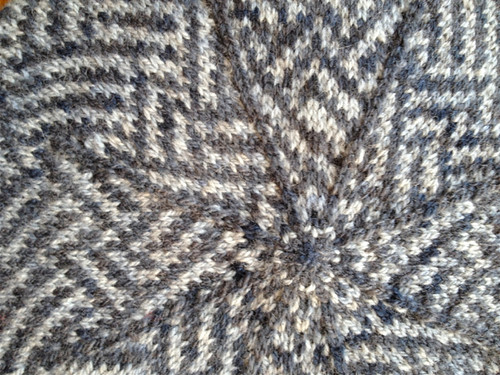 The hat's knitted on relatively small needles from a thickish sportweight Corriedale yarn and consequently is dense enough to probably be waterproof, or at least damp and shower-proof. A very Scottish hat. But my problem is that the hat's slightly too big, and because it's relatively heavy it falls around my eyes. I just don't have enough hair to anchor hats securely. 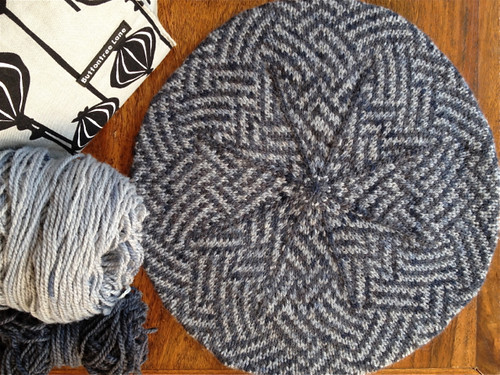 I guess I have various options for my too-big hat. I could pull it out and re-knit it to an appropriate size, but I think this might take my colourwork practice just a bit too far. I could give it to someone with a bigger head or more hair, but I like it and want to keep it. So, I'm going to try sewing some grosgrain ribbon to the inside of the band - like many old-fashioned berets had - to try to make it fit me. Wish me luck!
Posted by LynS at 11:25 AM

Both gorgeous projects. I love love love that hat. The colourwork is gorgeous. I do hope you can make it fit (if the ribbon doesn't work maybe hat elastic? (I mean woven through the cast on edge, not to put under your chin, heh!)).
I love the size of the scarf. Fantastic. I so wish yellow was my colour, but alas, I will have to leave it to you.