I'm not being very efficient at blogging retrospectively about my North Atlantic trip, but I'll plod on. As I get older I'm becoming more and more aware of how fragile memories are, and of how valuable the act of recording is in anchoring my recollections. So, Iceland.

I want to go back to Iceland. We had three days in there and it wasn't nearly enough for a slow tourist such as I am. What was so interesting?

1 The landscape. When we anchored in Reykjavik, this was the view from our cabin verandah. Over our three day stay there were varying degrees of mist and clarity, but it was always lovely. 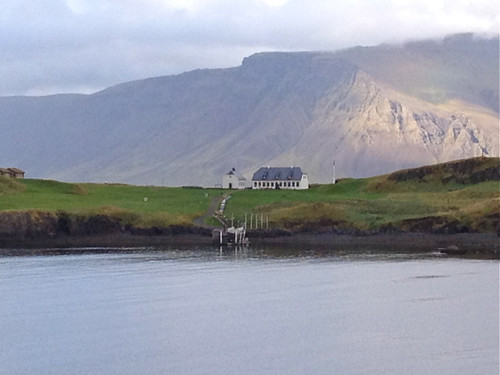 On one of the days in Iceland we made the well-known Golden Circle tour outside Reykjavik that takes in some of the accessible natural wonders of Iceland. Everything we saw was wonderful (we did have fine and sometimes sunny weather) but it left me longing to see even more, and to see the variations that must occur with the seasons. 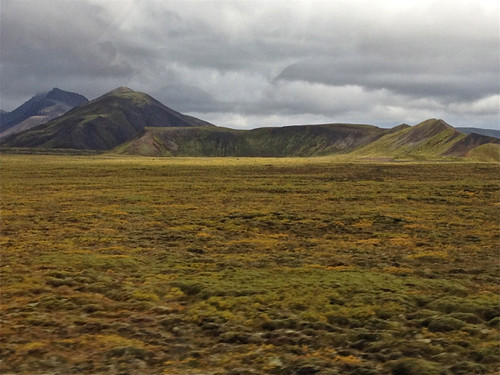 Even in the brief time we had we glimpsed Iceland's spectacular natural environment. We saw the Gullfoss waterfall where the river plunges into a crevice and seems to disappear in a cloud of mist (this was one of the many occasions on this trip when I realised that my smartphone was an inadequate camera. My prior satisfaction with photos taken with my smart phone was very delusional when it came to photographing something as wonderful as these falls): 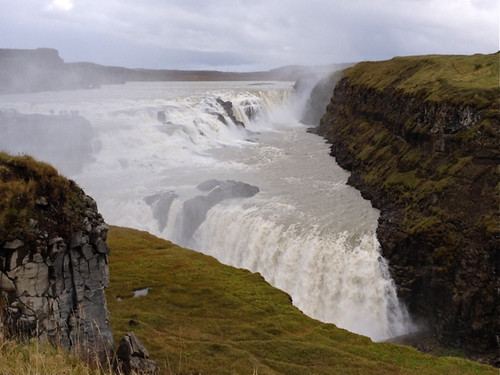 We walked through the Hankadalur geothermally active area and laughed with delight at the sudden explosions of the Strokkur geyser that spurts 15 to 20 metres into the air: 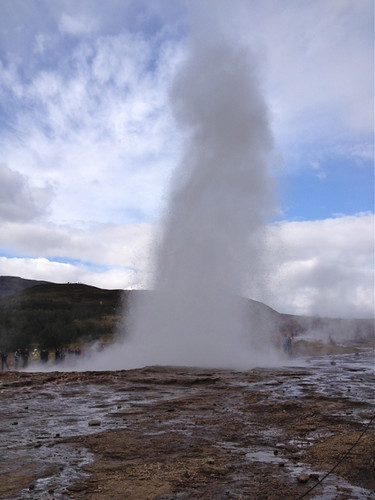 Then there was the breathtaking Thingvellir National Park where the Althingi, Iceland's ancient parliament, met from around 930 to 1798, and where the major tectonic plates of the northern hemisphere meet and are gradually separating: 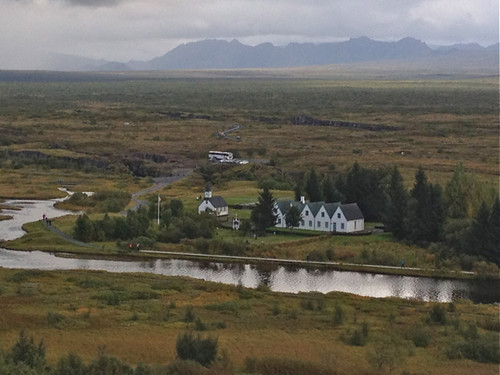 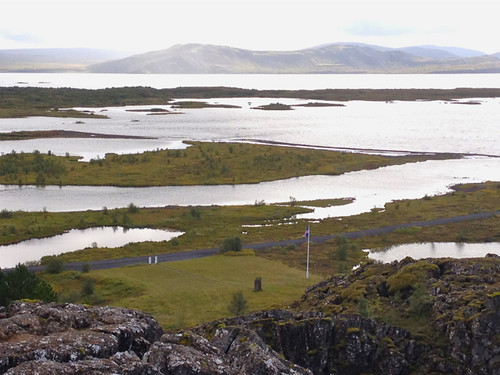 We saw all this wonder in a day's short trip. I'm so grateful to have seen this stunning land, but I've been left with a great desire to travel further and see more.

2 Secondly, Reykjavik is charming. It's a small enough city to walk around the centre and admire its modern structures such as the Harpa Concert Hall 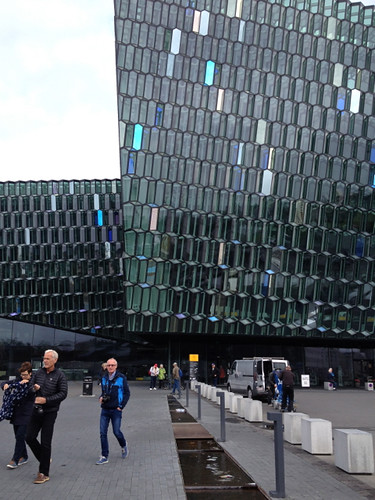 and the mid-twentieth century Halgrimmur Lutheran church that dominates the city's skyline (and serves as a useful orientation point for the wandering tourist). 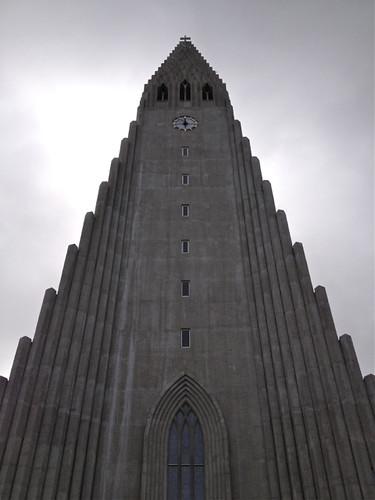 There's great charm in the Tjornin Pond that's a feature of central Reykjavik, 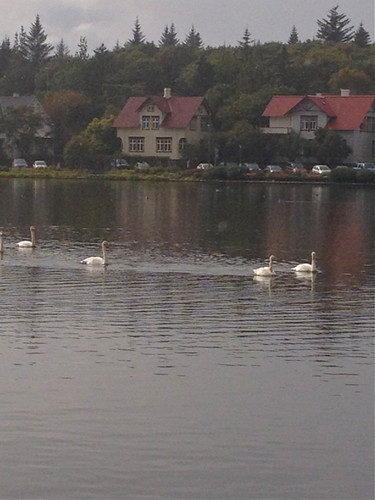 and in the colourful residential areas that surround it. 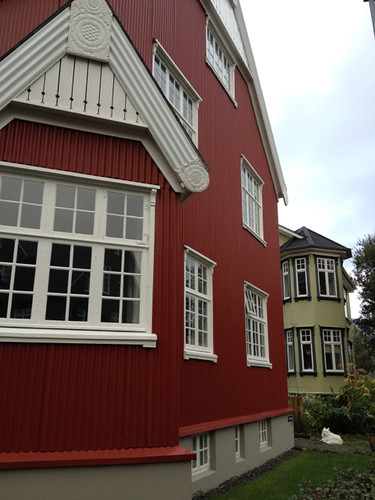 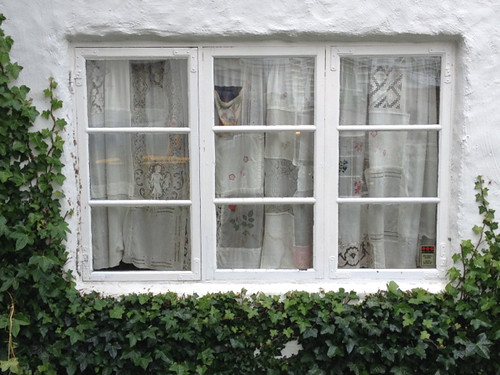 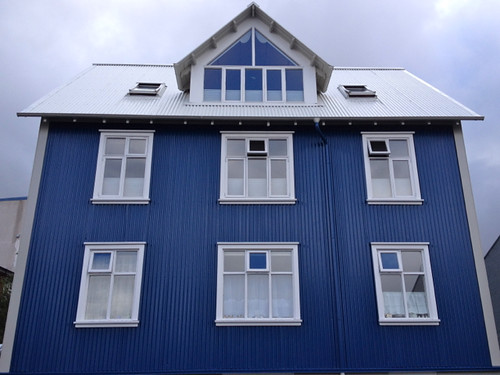 3 Third, Iceland's history is intriguing - especially for an Australian. Very superficially, there are a number of things that Iceland and Australia have in common. We're both island nations, quite isolated geographically. We're both countries of magnificently fierce and mainly uninhabitable landscapes where small populations cling to the coastal edges. In both Iceland and Australia you have the sense that people inhabit the land uneasily - aware that extremes of climate and the vagaries of the natural world will make human habitation challenging. But there are ways in which we're very different. Iceland has had European settlement, initially from Norway, since at least the ninth century. There were no indigenous settlers in Iceland so that consequently there's an unquestioned sense of ownership of Iceland's history and traditions. Until very recently Iceland's history of settlement and immigration has been almost entirely Northern European and even today it seems to the casual visitor to be culturally homogeneous.

Icelanders document their history with pride. I found the National Museum of Iceland, which recounts Iceland's history since the ninth century through the display of iconic objects and artifacts so engaging that I visited twice. The displays were all interesting, but of course I lingered longest with those that documented Iceland's rich textile history, such as this embroidered altar-frontal whose design could have been made yesterday, but in fact dated from 1694, 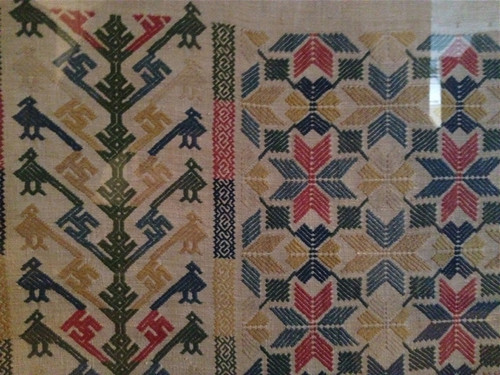 and these nineteenth century sealskin shoes with their knitted inner-soles. 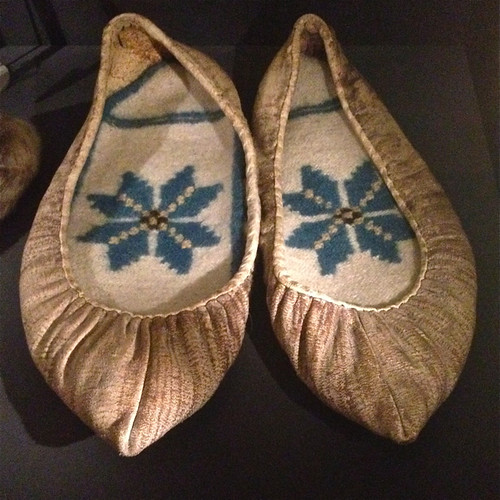 I also managed to visit the Arbaerjarsafn open-air museum, after much grappling with rain squalls, the inscrutable route of the number 12 Reykjavik bus and an opening schedule that had moved to its winter hours on the very day of my visit. Arbaerjarsafn is located in a field on the outskirts of Reykjavik and combines an original farm with 'typical' buildings from past times that have been relocated to this site. As readers of my blog know, this is my favourite kind of museum - one where a combination of architecture, furniture, decor and everyday objects gives you an insight into the lives of people in the past. 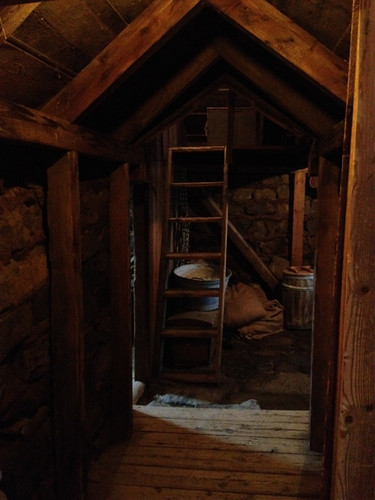 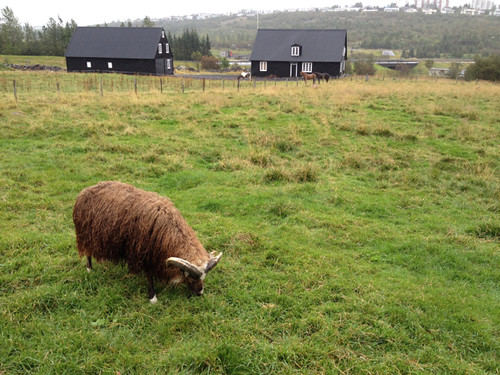 4 Finally, Iceland is a splendid destination for anybody interested in textiles; particularly yarn and knitting. We visited the Istex yarn factory, which is another inspirational business model that supports local wool growers and processors. Istex buys wool directly from farmers across Iceland and then scours, spins and processes the wool locally. Among other woollen products, Istex makes the Lopi yarns in various weights that are knitted into the famous Lopapeysa yoked sweaters. 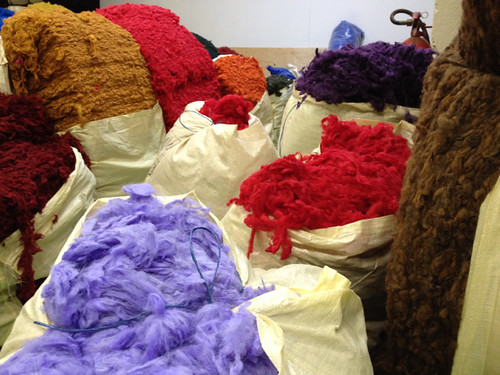 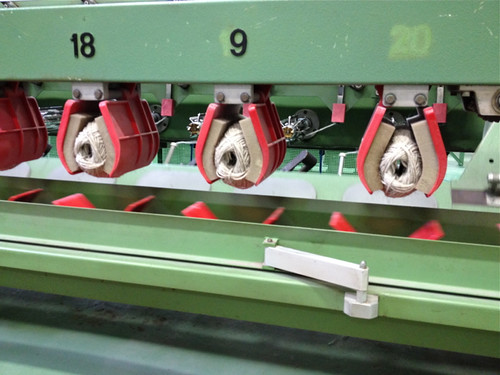 Almost everywhere we turned there was yarn and knitted woollen garments and blankets. At the Alafoss outlet in in an old factory by the Alafoss waterfall in Mosfellsbaer there was a huge range of the Lopi yarns for sale in all weights and colours, as well as handknitted jumpers, cardigans, jackets, hats - everything you can imagine, including the most exquisite small dolls decked out in handknitted traditional Icelandic dress: 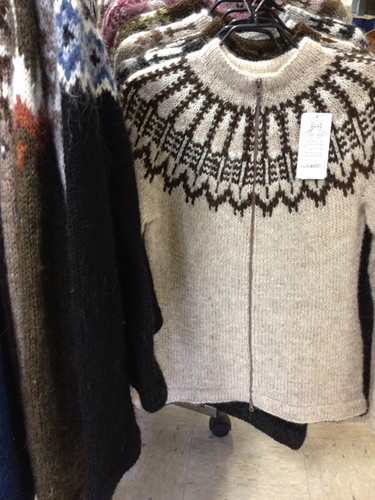 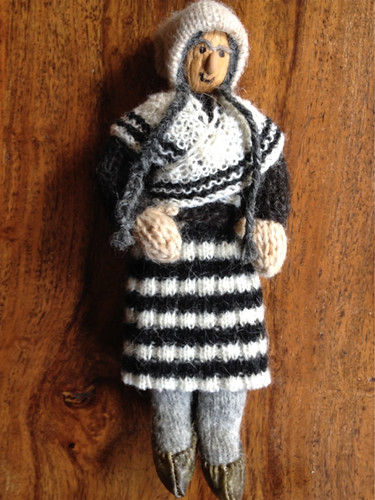 The Handknitting Association of Iceland store in central Reykjavik, that enables customers to buy directly from the knitters, was literally stacked from floor to ceiling with handknitted goods, as well as the Lopi yarns. Lots of lopapeysas: 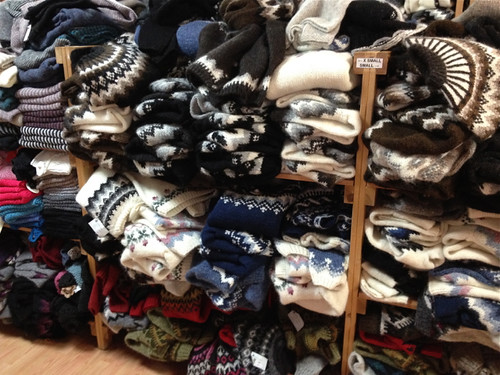 And finally, there was the beautiful Storkurinn yarn store where the owner Gudrun Hannele Henttineu, who is currently writing a book on the tradition and practice of mitten knitting in Iceland, gave us a talk and showed us a dazzling variety of old and new mittens illustrating the patterns and their development. Such a treat. 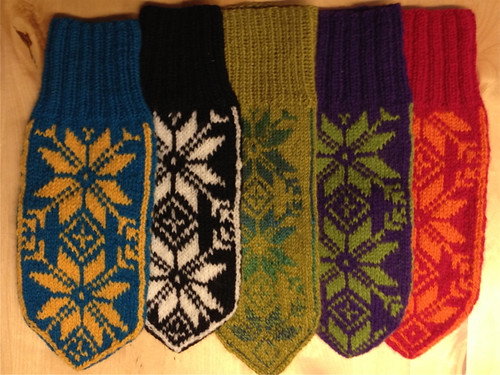 So what did I buy? Remarkably little considering how much was on offer. I was overwhelmed. I bought only one skein of Lettlopi, the yarn from which the lopapeysa sweaters are usually knitted. I decided I wanted to see how it knitted up and used it in my Lopi class where we knitted a miniature lopapeysa. I also bought four skeins of bright red Lopi Einband (a sturdy laceweight yarn) at Alafoss, and at Storkurinn I bought some Gryla yarn that's a recent project from French-Icelandic knitter Helene Magnusson. 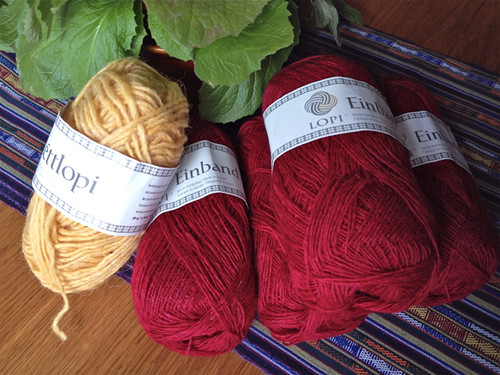 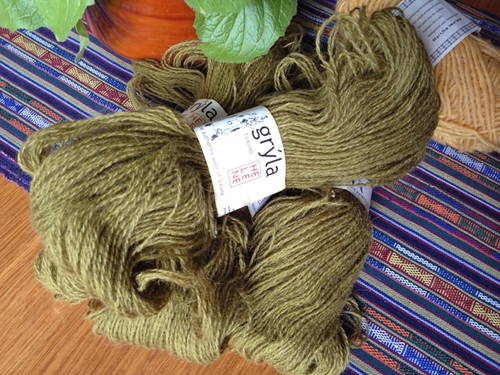 Thank you for sharing your travels! I love your visiting the world vicariously through your beautiful pictures and lovely descriptions.

you know, i have just finished my third indridison book and he mentions the tourists coming into the hotel in rejkavik with their knitted jumpers! what a beautiful and interesting place, and more admirable yarn restraint. i think what you did buy is perfect though.

thank you for posting,I loved your photos and infomation.Id love to get to Iceland one day and see the textiles and museums.Inspired now!
Sharon