It's almost three months since I last posted on my blog. I'm not sure why I stopped writing posts. It wasn't really intentional. Over time, one of the things I have most valued about blogging is the record I have of my trips and travels, so it's quite odd that I stopped writing just as I began my recent trip to the UK. Now I really regret that I didn't keep a record of what I saw and what I thought at the time of seeing. Somewhere I read recently a comment of novelist Zadie Smith that 'The very reason I write is so that I might not sleepwalk through my entire life'. Writing is not such a central part of my identity as it is for a talented novelist like Zadie Smith, but even writing my blog certainly moves me to observations, comparisons and reflections that fix experiences in my memory.

I've recently been reading Wallace Stegner's 'Crossing to Safety' (which, by the way, is one of the best novels I've read in a long time) where one of his characters observes 'Henry James says somewhere that if you have to make notes on how a thing has struck you, it probably hasn't struck you'. Much as I admire Henry James, I'm not sure I agree with him - or maybe he just had a much better memory than I have. As I get older I panic that if I don't make a note on how a thing has struck me it will simply drop off the edge of my mind.

So to get back into the swing of blogging I'm going to write a simple post about socks. I seem to have spent a lot of time knitting lately, but have very little to show for my activity. This is partly because I've been trying to master new knitting techniques and I've spent just as much time unravelling as I have knitting; I think it will take me the rest of my life to master brioche stitch! But I have been doing some sock knitting. Socks are great to knit when you don't really want to commit to a major project and you want something small enough to carry with you when travelling.

I've knitted two pairs of socks over the last few months - both of them patterns from Nancy Bush's 'Knitting Vintage Socks', my favourite knitting book ever. First there was Nancy's 'Yarrow Ribbed Sock', made from ever-reliable Regia sock yarn in shades of blue and grey : 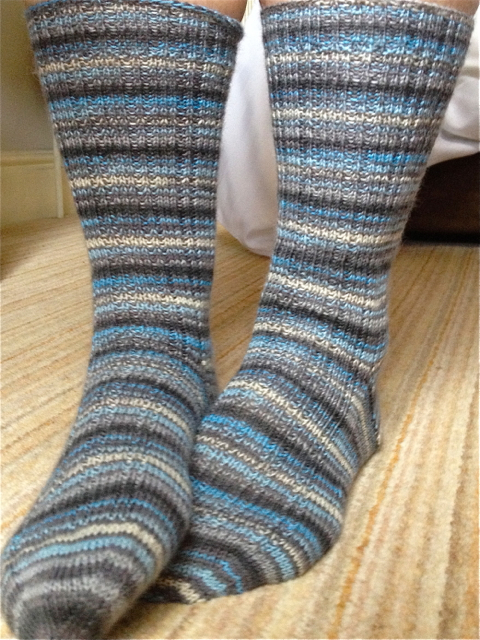 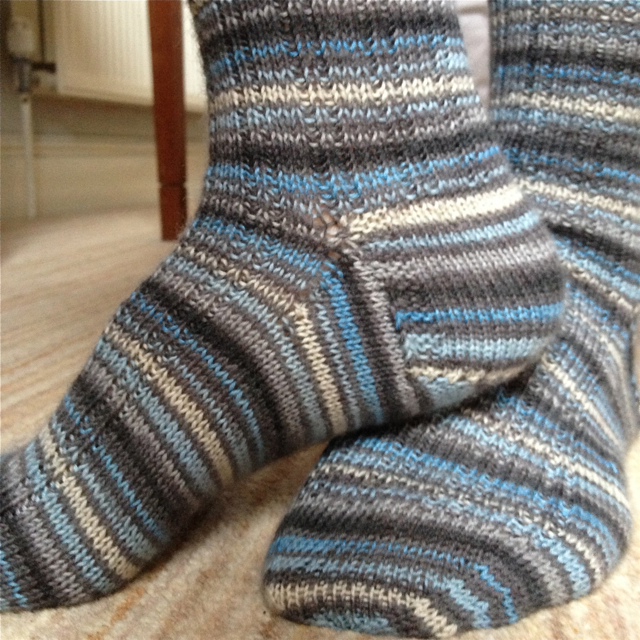 These became a gift for my friend and ex-colleague Maja who generously hosted me for a couple of days during my trip to the UK. By the way, Maja took me on a visit to the intimate Framework Knitting Museum in Nottingham, but maybe that's the subject for another post.

While in the UK I bought some very British sock yarn - West Yorkshire Spinners 4 ply purchased at baa ram ewe in Leeds (that's another story) - and embarked on what must be one of the plainest sock patterns ever, Nancy Bush's 'Gentleman's Plain Winter Sock'. I was still finishing off my first sock when I arrived back in Sydney and was so bored by my knitting (yes, even Nancy can occasionally be boring) I knitted a red toe with some very Australian Patonyl sock yarn donated by my friend Margarita. It then seemed inevitable to add some red stripes to the second sock to speed my knitting to completion. 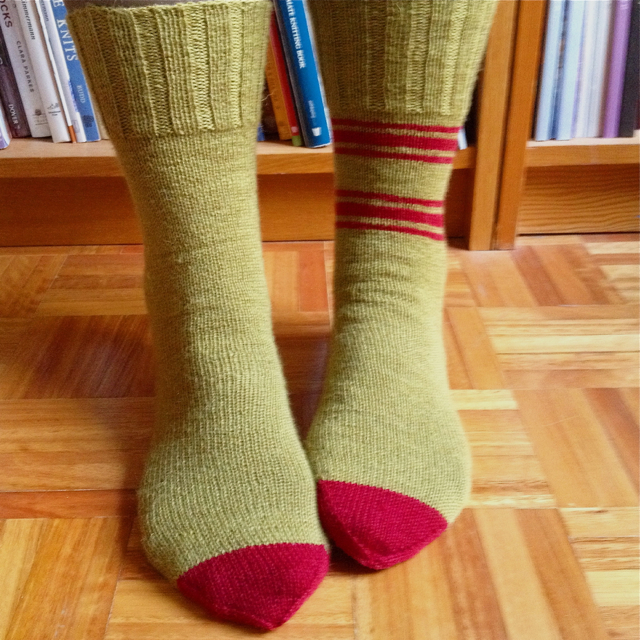 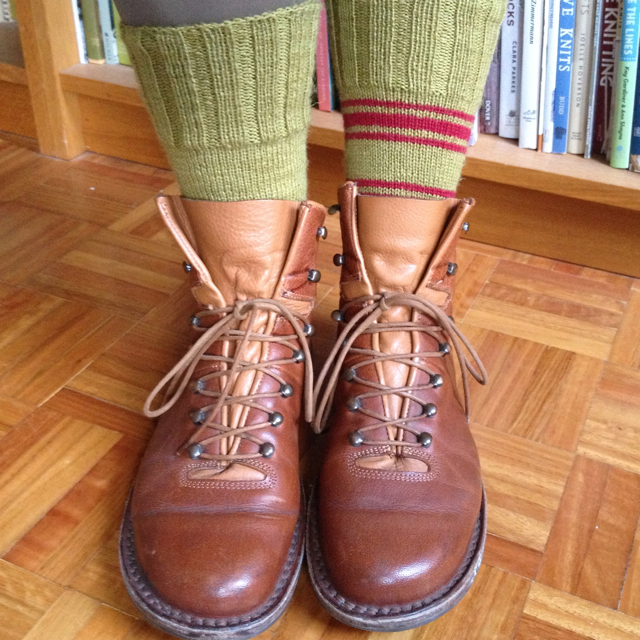 In my head I now ironically label these my Anzac socks. I was happily beginning to knit with what I thought was chartreuse yarn when someone casually asked if I was knitting khaki socks in honour of the centenary of Anzac Day. It hadn't occurred to me that the colour was actually khaki! And then knitting with contrasting poppy red only seems to have heightened the Anzac connection. Hmmm... Not really what I had intended.

I couldn't agree more with the value of writing - I find the blog forces me to fully form thoughts and observations and it amazes me how often I have to dismiss ideas because the original kernal of a notion didn't hold together through the process of wiriting it down.

And as for socks - oh my I do love the mismatches Anzacs!

I've been wondering if you were coming back. I don't travel so I've really enjoyed your writing about places you have gone. I hope you are going to tell us about that museum! Glad you're back.

Please tell us more. I love the socks, especially the fraternal pair.