After a few nights of waking at 3.00am and feeling chilly I've accepted that it's time to put the doona on the bed. (Wikipedia tells me, by the way, that 'doona' is Australian English for a continental quilt. I've always known that there's a confusing variety of terms for this article, but hadn't realised that 'doona' was distinctively Australian). 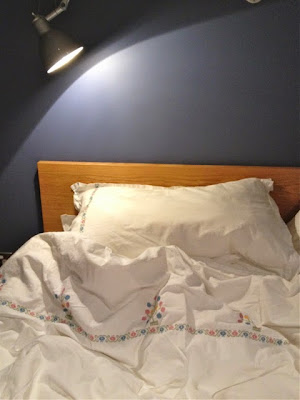 With a temperate climate such as Sydney's there are few markers of the transition from one season to another. In late summer the leaves of deciduous trees gradually wither and turn a dirty brown - they don't mark the approach of winter with a glorious display of colour. When I was growing up in an inland town where seasons are more extreme, ANZAC Day (25 April) was the time to pack away your summer clothes and bring out your winter ones. But nowadays, particularly in Sydney, there is not a great difference between clothes you wear in so-called winter and those for summer. Most of my clothes could aptly be described as trans-seasonal.

So, taking the doona from the cupboard, choosing a cover, and snuggling into it at night has a particular significance. Cooler weather (comfortable knitting weather) is on the way and, with great relief, I can bid goodbye for six months or so to summer humidity.
Posted by LynS at 6:53 PM

I've had to pull the doona up this week too, brrrrr! I had a visit from a friend today, who now loves in the UK. It's summer weather here for them!!

What a cozy tale! Doesn't knitting go so well with a little chill?

Although I love our 4 seasons, I do dread the task of carting the exiting season's clothes to another room and carting back the approaching season's duds. Being able to wear one wardrobe all year would be nice.

It took me ages to remember that I was now using a doona not a duvet when I came from NZ. Not sure why it was renamed. It's still two syllables and no easier to say. One thing I don't wear in Sydney in summer is tights, and rarely a cardigan or long sleeves. So winter does mean a slight wardrobe shift to tights and cardies and long-sleeved T-shirts.

i love this little ritual too. i have been under the doona for about a week now and i definitely sleep better. the early evening/early morning chill is such a relief. i'm the same with the wardrobe. maybe leggings and an extra layer and that's it. i long for snow.

Love the change from Summer to Winter doona's, and thicker pajamas. Knitting is so much nicer. Evenings now see the lighting of the open fire. Still warm enough that we don't need it going through the day.
We had weeks of over 40 in summer this year so even though I like the heat, I'm not sorry to say goodbye and hello Winter

What a beautiful doona cover and matching pillow case with fine embroidery. They just invite you to snuggle. You will be knitting for ages with your silk and merino purchase, but I can imagine a beautiful lacy shawl will be the result. And - for what it's worth: I think that the shaded olive green is a more attractive colour for you than bright yellow. Barb