For those of my commenters who wanted to know what I bought at Tangled Yarns...I couldn't resist the saturated colours of the Cascade Forest Hills laceweight: 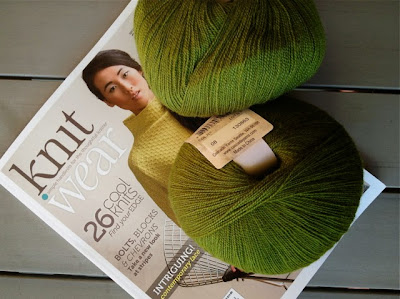 It's a soft combination of 49% merino and 51% silk. Two skeins is about 1430 metres, so I have plenty to make one of the large shawls that I like so much. (Please don't ask me what pattern I might make. That's a decision too far). I really wanted the vibrant golden yellow, but it had sold out within a week of arrival. Yellow is clearly the colour du jour. Cascade, in a fit of unimagination, number their colours rather than naming them, but I think of this colour as a bright olive green.

I also bought a copy of Interweave's 'Knit Wear'. I suspect it's probably about three years since I last bought a knitting magazine. Ravelry's pattern facility has really undermined the market for such publications. But the magazine has several patterns featuring the boxy shapes I like and that seem to be current. Of course the patterns aren't nearly as attractive at home as they were in the pleasant browsing spaces of 'Tangled Yarns', but I guess that's part of the store's marketing genius.
Posted by LynS at 11:23 PM

I buy magazine these days only as a treat to myself for some imagined hardship. But you are right. They never loook as good at home as they did in the store.

That green is spectacular! Can't wait to see what you make from it.

Isn't it a lovely yarn? I felt it at Purlwise.... Great colour for you.

Oh yay! Glad you bought some of that yarn, looking forward to a squish of it.

I can understand why you were tempted by that beautiful yarn I was myself but I have to knit from the stash this year or it will end up in landfill once my time is done
www.purlwise.com.au has the golden yellow you were looking at
looking forward to seeing the finished shawl

great purchase combinations! i like that magazine, but i cant remember the last time i bought one. in fact i am about to throw out a large pile of old IKs. i am intrigued by that yarn now, and cant wait to see what you make, it will be gorgeousl