I've been to see 'The Rover' at the Sydney Film Festival. This film seems to have divided the critics and, even more, the audience. I fall into that part of the division that thinks it's a great film. There were high expectations of Australian director, David Michod, after international acclaim for his first film, 'Animal Kingdom'. He had many international offers of scripts but chose instead to make a film in Australia to his own concept and script. 'The Rover' is absolutely pared down, spare, bleak. It's set in the near future in a world that's not some post-apocalyptic chaos, but the result of a gradual decline of caring and order. A world we can all fear just now. Guy Pearce plays the central character - grim, despairing, murderous, apparently without compassion. Robert Pattinson plays a younger man who has grown up in a grim world and who has no capacity for making moral judgements, other than his desire for connection with others, to guide his decisions. The script is minimal, but sufficient. The acting, especially Guy Pearse, is excellent and the casting of a ragtag of outcast minor characters is excellent. The landscape of interior Australia is not the glorious glowing red of central Australia but a dusty grey-yellow that is perfect for the grimness of the world of despair. I particularly liked the very controlled, slow, and gradual revelation of the backstory of Eric, the character played by Pearse.

Though it's very different from the riotous family ensemble of 'Animal Kingdom' I think the two movies share a horrifying view of what happens when societal conventions are abandoned and the amoral or criminal becomes normal. Michod himself says that he thinks there is a modicum of hope in 'The Rover' that didn't exist in his previous film, but I'm hard-pushed to see any hope at all. For me it's a thoroughly dystopian view of the world that's presented. A warning for our times. Four and a half out of five.

Of course I've seen other films as well - some of them over the weekend in the grandeur of the State Theatre. 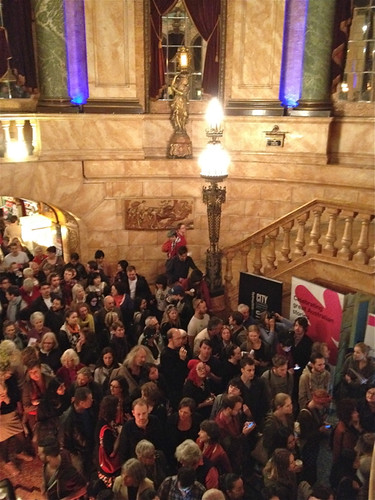 Director Richard Linklater clearly has a fascination with the effects of time on character. His latest film,'Boyhood' was filmed with the same characters across twelve years as a seven year old grows to a young man. It's a quiet, humane film that charts both the predictable and unexpected developments in a family's life. Four out of five. I was reminded of Michael Winterbottom's 'Everyday' that screened in last year's Festival as he filmed a family's everyday trials over a six year period. Both films are quietly engaging.

'Omar' was a 2013 nomination for a best foreign film Oscar. It's not a perfect film, but certainly deserved its nomination. It's a story of a young Palestinian man confronted by the impossibility of making the right choices when the world around is unjust and irrational. Great performances and a wonderfully filmed urban landscape that echoes the complexities of people's lives. Another four out of five.

What else? 'The Kidnapping of Michel Houellebecq' where controversial French writer Michel Houellebecq plays himself in a whimsical reconstruction of what is rumoured to have happened in a secretive period of his life. Very self-indulgent. Very self-referential. Innovative film-making that is occasionally amusing but ultimately rather trying. Three out of five. And 'National Gallery' - a very beautiful, quite educational, but far too long documentary about London's National Gallery. Much in need of editing. Maybe a three.