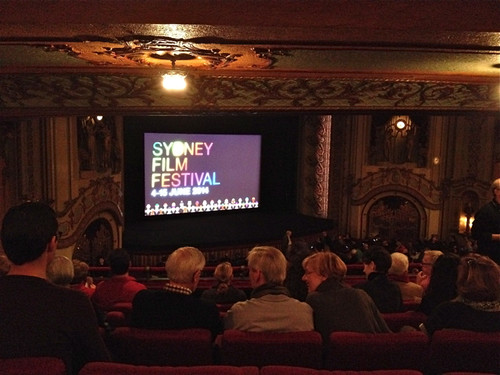 I had a fun finale to this year's Sydney Film Festival with 'Snowpiercer'. Sci-fi is so far from being one of my preferred film genres that I probably found this film more novel than sci-fi aficionados would. I loved the central conceit. In the aftermath of a disastrous intervention to avoid global warming the world has frozen. The only living creatures are those enclosed in a lengthy train propelled by perpetual motion and continually circumnavigating the world. The train is organised into sections - ranging from those in first class whose every whim is indulged to those in the rear of the train where survival is marginal, life degraded, and the periodic desire for revolution inevitable (and encouraged to control population growth). The allegorical possibilities of this arrangement are almost endless. The film is violent, but in the rather abstract way of graphic novels. I was intrigued by the tone of the film - veering from the almost-serious exploration of such themes as the exercise of power and its betrayals to the black humour of the wonderful Tilda Swinton's portrayal of a didactic petty official. It's a mainly English language film featuring a well-known international cast from the UK, USA and Korea and directed by successful Korean director Boon Joon-Ho. Four out of five.

One of the reasons I found 'Snowpiercer' intriguing is its combination of cultural sensibilities. I guess the sci-fi genre is now so internationalised that it enables input from a range of cultural traditions. This blending of cultures was evident in another film I saw - the Chinese film 'Black Coal, Thin Ice' that this year won the Golden Bear at the Berlinale. It's set in the present day, in an industrial town in the north of China. It's winter and there are many grimy, icy streets. Again, this is a genre film. Its director, Diao Yinan has clearly been influenced by the conventions of the urban crime thriller - there's a disillusioned detective who drinks too much, corrupt cops, crime gangs, a mysterious, vulnerable woman who cannot be trusted, and a long-unsolved crime that haunts the disillusioned detective. Despite (or because of) these well-worn devices, setting them in a Chinese context gives new interest to this genre. Again, a four out of five.

I had high hopes for the Australian documentary, 'Black Panther Woman' that features Marlene Cummins who, as a vivacious teenaged Indigenous woman, was associated with the short-lived Australian version of the Black Panther movement in Brisbane (of all places) in the early 1970s. Forty years on, Cummins reflects on this moment in the movement for racial equality in Australia and of the frequent failure to extend the objectives of equality to Indigenous women. It's a delicate balancing act to support and engage with the fight for Aboriginal rights and yet provide a critique of the misogyny within that struggle. The film doesn't quite succeed. It feels a bit too careful; a bit too restrained. Even so, initiating a discussion of these issues is a very brave move for Cummins and the film's director, Rachel Perkins. Three and a half out of four - mainly for its courage.

And then there was 'The Two Faces of January'. Total pleasure. This is a most professional film. Beautiful Greek locations; Viggo Mortensen (sigh); based on a novel of the same name by exquisite crime writer Patricia Highsmith; screenplay and direction by Hossein Amini who waited many years to film a story he loved. What's not to like? The blurb for this film in the Festival program says 'This is a gripping thriller set in stunning locations with beautiful people doing dangerous things'. An apt description. It isn't innovative, but it is a perfectly-made conventional film. I imagine it will have wide commercial release and I would unhesitatingly recommend it to anyone wanting to see a sophisticated, masterly, beautiful, thoroughly engaging film. Four and a half out of five.

Another year of intensive film-going done. As I'm sure I've written before, I really value the opportunity to 'get my eye in'; to see a number of films in a short period of time and appreciate relationships and trends, as well as being able to contrast different traditions and approaches to film-making.

I saw an ad for commercial screenings of Two Faces of January just today! Opens on June 19, I think.

Thanks again for the film reviews. I've not seen many Australian films but did see and love Rabbit Fence. Thanks for the tip re The Two Faces Of January. I'll watch for it.