The art of matching

Do you notice anything? 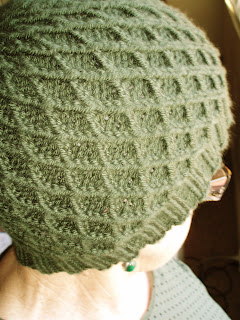 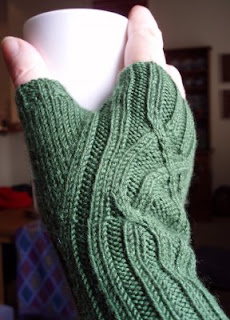 They're both green and they're both cabled - but one is the elegant Koolhaas hat I received from Sonia, and the other is the Serpentine mittens I made for my swap partner. There must be something in the knitting zeitgeist that caused us both to choose so similarly.

Sonia also made me a case for my specs in the same cabled pattern and yarn as the hat. This set me off thinking about the whole notion of 'matching'. I grew up under the influence of the Woman's Weekly - the bible in 50s Australia about what was appropriate for the modern woman. There was endless detailed information about how to dress - with particularly strict rules about matching - your gloves had to match your hat, and your shoes had to match your handbag. This was non-negotiable. I remember hours of agonising about whether shades of red (or any other colour) were identical, because the colour match had to be exact. On the positive side, this has left me with a good colour memory; on the negative side it has ill-equipped me for a world in which flouting the rules for what goes with what is now much more highly valued than 'matching'. I catch myself being careful not to seem too 'try-hard'! I still find it almost impossible to ignore the old dictums - deep inside me the Women's Weekly rules still echo - but what I now find myself doing is checking that things don't match too much - that the reds clash slightly, that I can wear bright pink with yellow (at least in summer) and that even the shades of grey don't match.

And how's this? I just read Brock Clark's An Arsonist's Guide to Writers' Homes in New England, an off-beat new American novel where I noted this: 'She was wearing a red jacket and a red scarf and red gloves and a red ski hat, all obviously part of a matching set. And this will go in my guide: if you want to appear menacing, then don't wear a matching set'.

I don't want to give up the possibility of being menacing, so I'll just have to work harder at the non-matching. (Sonia, I'll keep my specs case in my handbag, so no-one except me can see it matches and it can be a secret pleasure!)
Posted by LynS at 7:08 PM